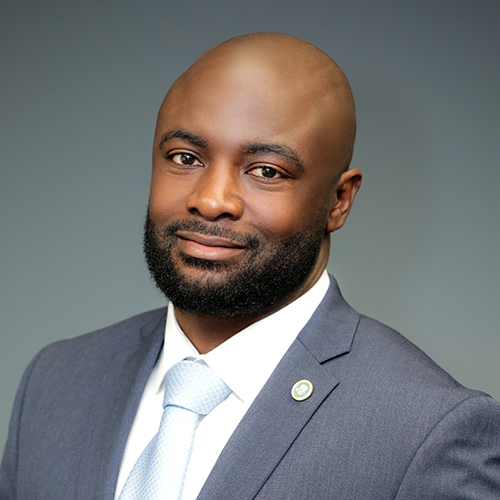 “For the people” are the three words that shaped the life of a young William Purnell. From his early years of childhood, he has looked for ways to serve and improve his community. “Having the opportunity to travel the world, I began paying attention to the changing efforts of energy efficiency and its benefits. As I watched the distribution of renewable energy resources and small-scale solar energy projects emerge, my interest was piqued. The consumption, costs, and home energy efficiencies became more intriguing to me once I became a homeowner and understood and comprehended identifying factors on a more familiar platform.” Most recently, Purnell has taken an interest in the economics of energy and electric reliability.

Purnell holds a Bachelor of Arts degree in criminal justice from American Military University and a Master of Science degree in human resource management from University of Maryland University College. Upon his departure from the Presidential Air Group Pack of the U.S. Air Force, he continued to serve his country as an officer at the National Security Agency. Over the years, Purnell has received the Air Combat Commands Top Gun Award and the U.S. Department of Transportation’s Team Award. Purnell is the founder of Purnell Realty Investments and Management Enterprises (PRIME), and he works for the U.S. Department of Homeland Security as a Federal Adjudicator.

Purnell represents Charles County on the SMECO Board of Directors. As a member of the Co-op since 2004, he has helped offer comprehensive exposure and hands-on programs for youth to expose them to the business of energy.

Elected to the Board in 2017, Purnell currently serves on the Personnel and Benefits Committee in addition to the Policy, Audit and Budget Committee.